Midnight in Paris – Hemingway, Fitzgerald, and Dali! Oh My! 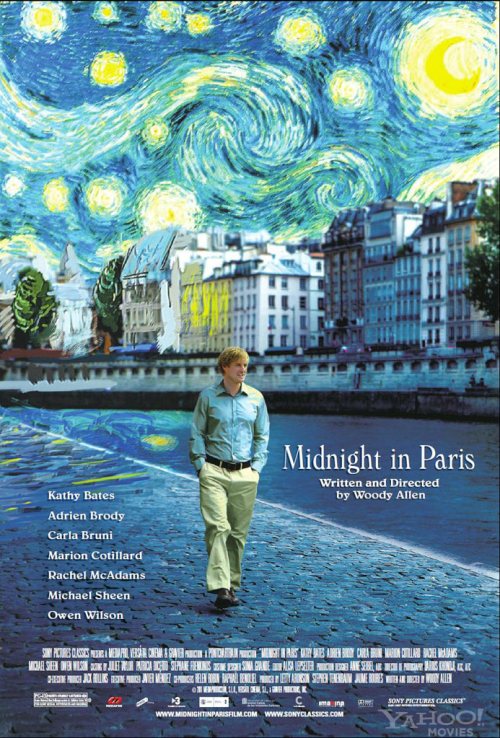 Entering a movie theater is a little bit like being swept away to your golden age, isn’t it? From the opening scene until those distressing closing credits, you’re able to set aside all your worries, fears, and desires and enter a fantasy world, imagining that you’re right there with the characters, experiencing life the way you wish it were.

Then there are those other times when you sit down and as soon as the trailers start rolling you wonder what the hell you’ve gotten yourself into. They’re all subtitled and artsy beyond belief and bereft of anything even remotely resembling an explosion. How thankful I was to find that Midnight in Paris was not some foreign anti-schlock but rather a delightful and insightful comedy about love, loss, and the illusion of the golden age, which is apparently quite a problem. I’d never really thought about it before, but now that filmographer Woody Allen has pointed it out, I can’t stop seeing it everywhere! My parents, for sure. The good old days when everything wasn’t just about money, when free love and drugs ran rampant through the hippy community. When people weren’t so distracted by cell phones and technology and would just sit around a table playing cards and making genuine connections, you know, just being out among it.

Pretty much every adult I know seems to think that times are terrible now, what with our addiction to drugs computers and our rock and roll rap music and skimpy skimpy outfits. The long and the short of it is that it’s highly amusing to see a film poke such fun at this concept and at the same time give those present-day naysayers a bit of hope.

But how does Midnight in Paris accomplish this, you ask? MiP stars Owen Wilson as successful screenwriter Gil Pender, who’s unsatisfied with the forgettable nature of his work and wants more than anything to write a novel—something of actual substance. Family friend Bruce, along for  the movie, points out that, “C’mon! We’re supposed to feel sympathetic because his numerous successful screenplays aren’t good enough for him?” Well, as a future successful screenwriter myself, let me say that I can totally relate to this issue. 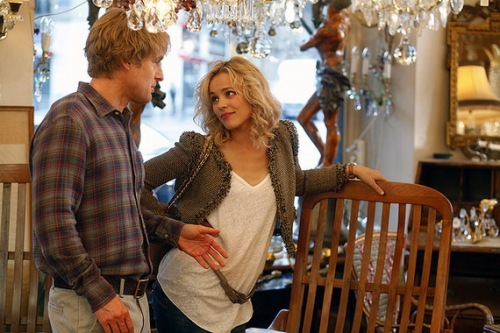 So hot, but so very very bitchy.

Gil travels to Paris with his fiancée, Inez (Rachel McAdams), and her parents, and is immediately taken with the spellbinding nature of the city—a place where inspiration is a palpable entity that lives in the rain and the air and, of course, the cute little shops. Inez is basically a constant bitch, and when she runs into her pseudo-intellectual former professor, she ditches her fiancé in favor of her college crush’s company. Gil, not quite so taken by Mr.-takes-himself-so-seriously-Ph.D., ends up wandering the streets of Paris, and when the clock strikes midnight, an enchanted automobile pulls up and transports him to the world of his golden age.

There he meets Zelda and F. Scott Fitzgerald, Hemingway, Gertrude Stein, Picasso, Dali, and many more. Now, I’m a Stanford graduate and am thus obviously absurdly intelligent—movies literally never make me feel otherwise—but I’m sure I missed over half the jokes in this film, and I’m an English major, for god’s sake! So many literary references are flying every minute that it’s impossible to catch them all, but somehow Allen manages to avoid making the audience regret their relative lack of literary knowledge, and the movie is still enjoyable for all. Walking out of this, I couldn’t help but wish I’d taken every available literature class during college just so I’d be able to fully appreciate this masterpiece of a film. In my not so humble opinion, all English majors should be required to watch Midnight in Paris yearly to inspire them to learn as much as possible. 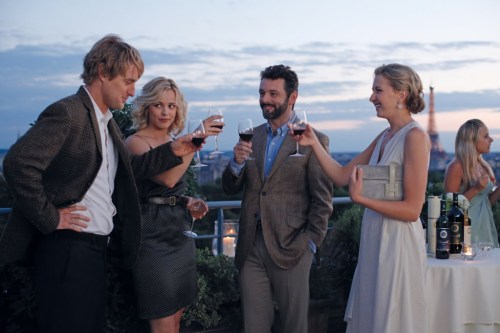 Just look at that horrible, horrible smile. That guy sucks.

But even having missed out on learning opportunities, I still found myself inspired. Owen Wilson plays a very compelling character with a pleasant story arc (though it was impossible not to hear Woody Allen delivering all the lines—I guess being 76 precludes you from some roles). Characters around him fail to experience any real change, so you feel especially proud when he finally realizes that there is no one golden age, that one must live in the present and do the best one can. It’s all a matter of outlook. Watching him perfect his novel and make some important life decisions was extremely satisfying. 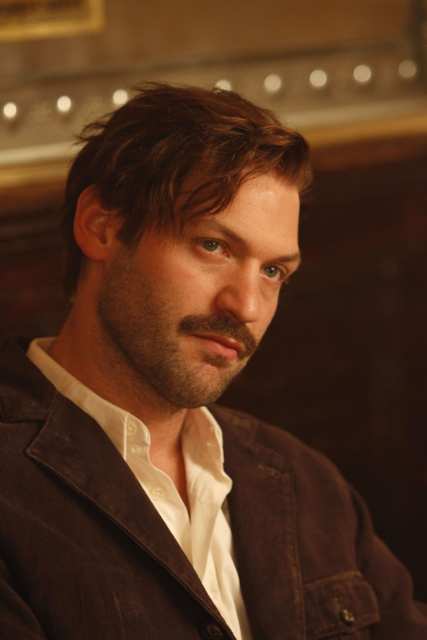 Unfortunately, not all the characters are so lucky. Other than our hero Gil, no one seems to become any more self-aware. I absolutely hated Inez, and making me hate Rachel Mcadams is no small feat. I mean, have you seen her? And the moment when Gil gets to “one up” the sleazebag professor on some painting knowledge is one of the best bits of comeuppance in film. And I would be remiss not to mention how much of a total badass Hemingway is, as portrayed by Corey Stoll, whose character absolutely steals the show with his intensity, carousing, penchant for alcohol, no-bullshit wisdom, womanizing, and lust for a good fight. He is an egotistical writer and a mentor who won’t cut you even a little slack, and every line he delivers is gold. I’ve always kept a bottle of scotch on my desk in his honor, sipping it from time to time at moments when I feel most writerly, but I never truly understood the full extent of his awesomeness until now. My hat’s off to you, Mr. Hemingway.

The only flaw I can find with this film (and it’s not really a flaw) is that it’s not groundbreaking. It just is what it is: a compelling time-travel romp with a good dose of heart.

Rating: Spectacular Gold (on the low end of each)

I wonder if my technology-loving generation will think of the future as the golden age. I want to be alive when there’s space travel and holodecks and teleportation!