Source Code Should Get with the Program

Suddenly, I came to a horrifying realization: Source Code was going to start without me. Still hoping to defy the odds, I drove downtown at a breakneck 25 miles per hour, flying up to every stop sign (then stopping) and racing through green lights. It was 8:17, 7 minutes past opening, and I still needed to find parking.

I circled the block once, but there were no spots, and I just ended up back where I’d started, like nothing had changed. Yet I knew the clock was still ticking. I decided to make another circle. There was the theater; there was the ticket box. It was the same block, but it was different. A parking spot! This time I knew what to do. How had I missed it before? I pulled in and jumped out of the car, happy to finally find freedom. Soon I was in the theater, and it was like I’d stepped into an alternate dimension.

For all that, I still missed the first 30 seconds, so I admittedly can’t be entirely sure that the movie didn’t meet my expectations. That opening shot could’ve been life-changing, but somehow I doubt it. I think probably my hopes were just too high. A sci-fi thriller told in the style of Groundhog Day? How could that not be the best thing ever? Groundhog Day is one of my favorite movies, and I tend to love any film whose structure defies the norm. The end-to-start style of Memento twisted my mind into knots, and I spent days discussing its every mystery. Vantage Point’s multiple, well, vantage points, raised it from blasé formula to edge-of-your-seat suspense. And the half-crazed chronology of 500 Days of Summer told us a tale of romance in the way we usually perceive it: scattered thoughts remembered seemingly at random. Each time, structure was perfectly united with story, creating that movie magic we so love.

Unfortunately, in Source Code, the time loop gimmick merely forwards a dull plot and hardly serves a higher purpose. The conceit of this film is that Captain Colter Stevens (Jake Gyllenhaal) is able to relive the last 8 minutes of a different man’s life (in this case someone named Sean Fentress), using the time to investigate the facts surrounding his death. You see, Sean died in a train bombing, and it’s up to Captain Stevens to relive those 8 minutes over and over until he can figure out what happened, thus preventing a second bombing set to take place in just a few hours. Now, a variety of characters repeatedly state that finding the bomb is Captain Stevens’ main purpose, so you’d think the task would prove to be relatively difficult. You’d be wrong. He finds it in like 10 minutes. That’s ok, though, because what’s actually important is finding the bomber. Surprise! It takes him like 2 tries. There are no twists, almost no misdirects, and things happen so fast that ultimately, there’s no tension. We get only one scene in which Stevens impresses us with his foreknowledge, and the things he knows about are as exciting as spilled soda. Spilled soda! 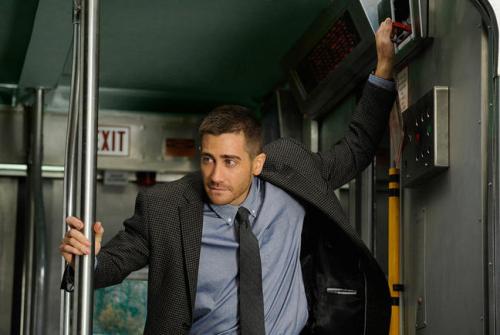 Jake Gyllenhaal may be more charming than a street performer with a basket full of snakes, but even he can’t bring Captain Colter Stevens to life in this straightforward story that eschews twists and thrills in trade for, I don’t know, romance or something. The trailer bills Source Code as sci-fi action with a girl tossed in, but there’s not a single action sequence. Sure, the train blows up every 8 minutes, but it’s much more melodramatic than it is awesome. And the science fiction–don’t even get me started on the science fiction!

Too late. I got started. Now, Groundhog Day is a classic because science is cast aside, leaving room for that little thing known as character growth. Rather than try to explain why Bill Murray is caught in a time loop, the writers spend all their time taking him from unlikeable cynic to lovable romantic. Source Code, on the other hand, feels compelled to explain things to us, but its half-hearted attempt only leaves us feeling more confused than ever before. The ‘source code’ itself is described with Star Trek style technobabble, then made into a painfully simple analogy. Dr. Rutledge (Jeffrey Wright) explains how everything works, saying, “It’s uh…quantum mechanics, parabola calculus…when a light bulb turns off, there’s an afterglow…the brain is like that.” Wow. Sounding real smart, doc. Source Code tries to prove how cool its premise is by throwing pseudoscience at us, but it never really matters since most of the movie actually takes place not in the ‘source code,’ but in reality, where we spend so much time that the train plot falls by the wayside, making Captain Colter’s ultimate success seem secondary and irrelevant. 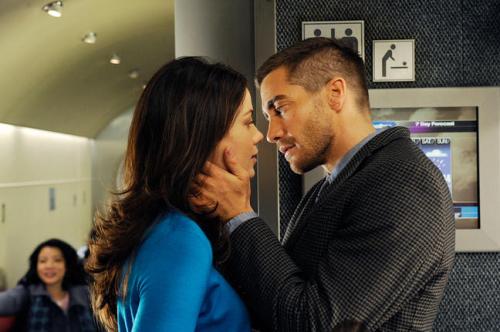 While his triumph over terrorists is implausible at best, his skill with women is even less likely. In just a few iterations of the train fiasco, Colter is able to woo the lovely Christina Warren (Michelle Monaghan). This is especially creepy for two reasons. First, Colter is literally stealing the identity of a guy that Christina obviously has some interest in. Now, for most of the film, Colter has to keep up the façade for only 8 minutes, but what happens afterward? Someday, Christina will find out that Colter is not in fact Sean Fentress, but is instead some hardcore war veteran on a top secret mission who, for all intents and purposes, has killed the guy Christina was interested in by taking over his body! How’s she going to feel about that (probably the way most women feel when that happens)? Second, Colter has fallen for this girl in just a few hours, and she has fallen for this new, more exciting version of Sean in literally 8 minutes. I know love happens fast in movies, but 8 minutes is just embarrassing.

There you have it. I love non-linear storytelling, but only when it’s done well and serves the plot. Here, it didn’t quite come together. Things happen too quickly, and nothing is particularly believable.

I know I railed quite a bit, but if the screenwriter had wanted to keep things on track, he should’ve trained more.