Real Steel: Atom the Sparring Bot Is The New Rocky

Steel Yourself Against the Unrealistic

In this highly original film, Hugh Jackman plays Charlie, a young, down-on-his luck boxer who is forced to fight in illegal underground leagues since the professional circuit won’t give him any matches, but he doesn’t understand the true danger that lies in these viscous boxing circles. In his first fight, he is maimed and beaten beyond recognition, and as he lies dying, a programmer surgeon boy genius from the audience comes to his rescue. With the boy’s newly invented technology, they can rebuild him, better than he was before, and Hugh Jackman becomes the first Robot Boxer.

Flash forward fifteen years. Jackman’s given birth to a part-cyborg son, Max, but he hasn’t spent any time with the boy because he can’t face explaining his robot origins and doesn’t want to tell Max that he’ll never be able to live a normal life. But when Max’s mom dies, Jackson is forced to take custody of the bio-robo-child, and while Charlie trains Max to be the best boxer the world’s ever seen, the two of them slowly learn what it means to feel semi-organic machine love.

No wait, sorry. That’s not the plot at all. The plot is actually Rocky…WITH ROBOTS. I just didn’t want to write about something so generic, so I made up my own storyline. It’s literally exactly the same as Rocky, only Rocky is named Atom, and instead of rooting for him, you’re rooting for the estranged father-son team who controls him with a joystick. It might be the most cliché thing since sliced bread, but who cares? It’s ridiculously fun to watch, maybe because robot boxing is literally the best sport of all time.

For example, there was this one part when this robot fought this other robot. Holy crap. It was awesome. And then the robots were jumping all around, and one of their heads came off this one time, and another time one of them exploded, and there was this sick Japanese one, and this really badass undefeated one named Zeus. Whoa.

Zeus serves as the main villain sort of. He’s Rocky’s Apollo Creed, but you know that he’s even more hardcore because Zeus is higher up in the chain of command than Apollo. Since Zeus is just a robot, he can’t really be a villain though. The actual bad guy is probably this hardcore Asian dude who programmed Zeus to be INVINCIBLE!! Asian guy looks super badass and is always glaring and snarling and he has the best lines in the movie, like “He has been programmed for every possible contingency!” and “The outcome of any match is inevitable!”

One of the best parts of this movie is Atom’s storyline. In Rocky, it makes sense to see him training and improving, and you can really root for him. Here, the writers need to go out of their way to make the tug-at-your-heartstrings Atom a likable character, and one of the main ways they do it is by giving him a “shadow function,” meaning that when you flip a switch he turns into a mimic, copying exactly what you do. That way, instead of training looking like a scene from Hackers, with Hugh Jackman inputting a ton of lines of code into a computer, you get to see Jackman literally teach the robot boxing moves.

Atom’s got a cute face and these big blue eyes, so he seems almost alive. In fact, pretty early on, the movie hints at him being sentient. The fact that he has a shadow function and can constantly learn from his surroundings lends credence to this theory, and maybe that’s why this amazing bot was found discarded in a junkyard…because he was becoming dangerously self-aware! I was excited for that plotline, but it was just a big mislead. In fact, it was so big of a mislead that I don’t think it was supposed to be there at all and I just read really heavily into things for no reason. I wonder if anyone else felt the same way.

Atom’s a sparring bot, which means he was built for other bots to practice on and he can take a lot of hits, but that’s pretty much all we know about him. When he gets knocked down, he gets back up, cause, you know, it wouldn’t be good sparring practice if he just stayed on the ground. It’s actually surprisingly emotional to see this robot constantly struggle to his feet, but when you think about, without the whole sentience thing, it’s not particularly impressive. Ooh, his wiring didn’t short circuit. Ahh, he’s not out of energy. Wow, he’s still got all his limbs. 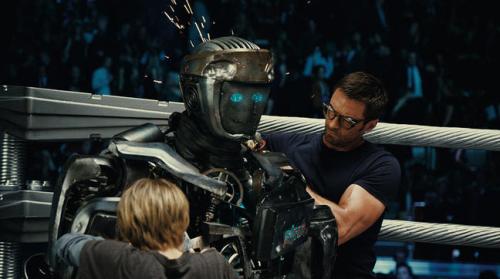 Throughout the film, Max keeps talking about how Atom can do things no bot has ever done before, and that’s why he’s so amazing, but the movie makes very sure not to ever mention or show any of these so-called “things.” Walking out of that theater, I was totally unaware of how in the world Atom had succeeded at anything. It’s not like he had heart, or drive, or even any particular skill. I think there was probably some witchcraft involved in a deleted scene. Eye of newt, tongue of shrike, make this robot Rocky-like.

I’m not sure if I’ve made this clear yet, but this movie is AWESOME. I absolutely loved it. The complete absurdity of it all was fun and never once got on my nerves, and the robot battles were almost sweeter than in Transformers. The kid was actually a good actor, and the movie was surprisingly emotional. Oh, and Evangeline Lily of Lost fame managed to land an another acting role, so that makes me relatively happy. If you like fun, nonsensical Hollywood movies with a heart, go check this out.

Shadow boxing is the coolest sounding climax gimmick in the history of film.