The Cabin in the Woods Explained — It’s a Giant Metaphor 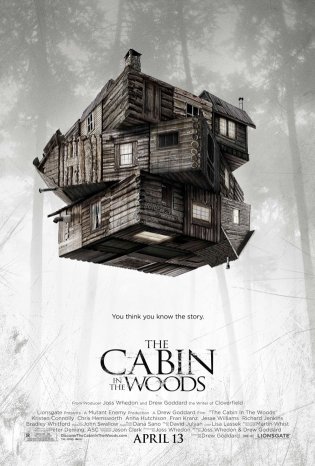 Perhaps a better title: The Cabin in the Air?

This movie should be required. For everyone. Not only is it brilliant, but it’s the only film I’ve ever seen that alters your perception of all other films. It’s funny. It’s scary. It’s clever. And the whole thing is, as the title of this review suggests, one giant metaphor.

And you have to see it right now because it’s impossible for me to discuss it without spoiling it. So be warned. Beyond this point, there be SPOILERS.

The basic premise for this movie is the most clichéd of all premises. Five friends (the jock, the dumb blonde, the stoner, the “virgin,” and the intelligent dude) decide to take an RV to a cabin in the woods for a weekend getaway, but they don’t expect the horrors that await them. What horrors, you wonder? Well that depends on what object they pick up in the mysterious basement. 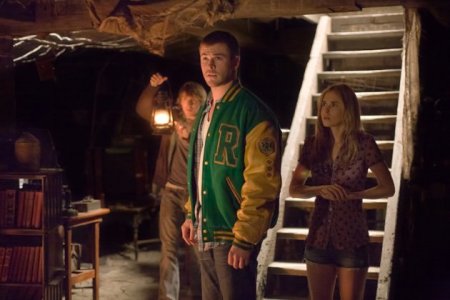 This isn’t your average horror movie. You see, imprisoned beneath the earth are the old gods, the demons that used to walk the land, bringing death and destruction. The only thing that keeps them trapped are the ritual sacrifices that we provide. But sheep’s blood and virgins tossed into volcanoes don’t cut it anymore. The gods have grown bored by such things and demand not only the sacrifice, but also a show.

That’s where the secret underground operations center comes in. An advanced and elaborate facility, it is up to the many technicians to create the ultimate performance. They must lure unsuspecting youths out to a cabin in the woods, then pump in the proper pheromones to cause them to make bad choices, and, finally, they must unleash the monsters that will murder said youths a graphic display of violence. If successful, the blood of the fallen 20-somethings will drain into the sacrifice chamber, the old gods will be appeased, and life, as we know it, will continue.

Throughout this film, we flash back and forth between the stereotypical horror movie plot and the facility. The dramatic irony involved in these jumps makes the whole movie fun. Sure, those poor kids are being gruesomely murdered by a family of zombies, but everyone at the facility is so desensitized that they’re getting a kick out of it, even betting on which monsters will slaughter everyone this round. 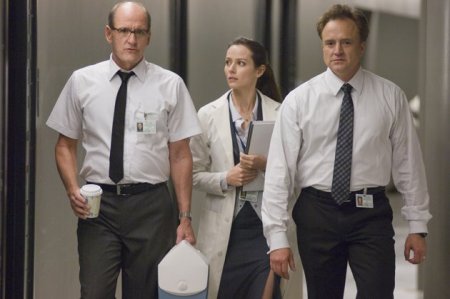 Gotta bring a cooler to the horrible, graphic, slaughter.

What makes this movie so wonderfully amazingly super fantastic is the metaphor. Don’t you get it? The old gods, that’s us! We used to be satisfied by simple plotlines (girl in a volcano), by a song and a dance, but no longer. We have developed discerning tastes, desensitized by decades of cinema. We watch horror movie after horror movie titillated by the death scenes.

The workers in the facility are the moviemakers. They know they have to appease the old gods, i.e. their audience, and if they fail, their world ends. If their movie isn’t entertaining enough, it will flop, and the old gods will write nasty reviews and complain about it on the internet, and the people in the facility will lose their jobs, which to them is equivalent to losing their lives. When they bet on which monster will kill them all this time, they’re wondering what new horror will rake in the most cash. And they’re just like us, to some degree. They get excited when they hear about a new plotline. When the creepy old men zoom in on the couple about to have sex, when they root for the girl to take off her clothes, that’s every male member of the audience secretly hoping for a shot of some boobies. 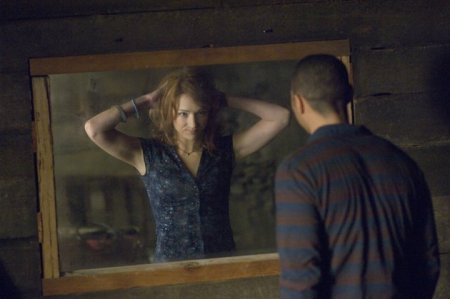 The poor kids in the cabin? Their plotline is the actual movie. It’s standard. It’s cliché. The actors go through the motions that the moviemakers force them to. Writers plan out a film. Those are the workers in the facility who build the cabin, who place the evil objects in the basement. Directors are the people in the facility who run the show in real time, summoning monsters, releasing pheromones, and collapsing tunnels. I mean, the head of the facility was even called “The Director.” The kids in the cabin are the actors. They have no free will, but are puppets on strings, tugged this way and that by the script and the director and everything that’s been set in motion. They perform for our entertainment.

Watching this movie is a life-changing experience. Not only is it entertaining, but it explains every other movie. Any time you ever noticed an inconsistency or witnessed a character making a stupid decision and thought “why on earth would they split up?” you now know the explanation. This movie fixes every problem in every film. We can assume that there was a facility controlling the actions of every character in anything we’ve ever seen, and because of that, we can’t fault the characters for their actions. 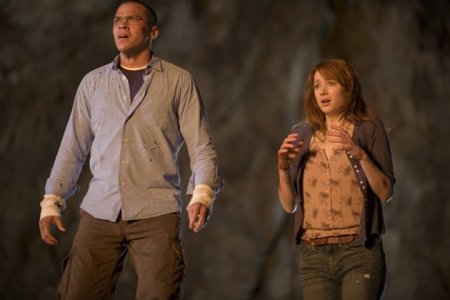 This is how you used to feel after watching a character decide to go down into the basement alone, but no longer!

And there was a facility in all those movies, wasn’t there? A director, a writer, trying to solve some problem with the story. Sometimes they do a good job. Sometimes we’re appeased. Other times they make The Last Airbender.

The Cabin in the Woods is primarily a comedy, mostly because it’s constantly poking fun at these conventions. When beautiful man Chris Hemsworth says they should stick together and defend themselves, the facility pumps in some stupidity in gaseous form and he changes his plan. When they’re trapped by a giant chasm and someone says, “What are we supposed to do? Jump?!” you get that classic movie moment. Hemsworth hears the word jump and gains a flash of inspiration. He pulls the motorcycle off the back of the RV and gives an inspiring speech. He’ll come back for them. He’ll come back with an army and save everyone. It’s a scene you’ve witnessed time and again, but this time it’s hilarious because the movie is pointing out the trope.

And even though I’ve already given plenty away, let me just say without ruining it that this movie has an absolutely amazing climax. I did not see it coming, and when it did, I was unthinkably happy.

The Cabin in the Woods is the epitome of meta cinema. The movie itself contains three separate layers, 4th walls within 4th walls, and once you understand the metaphor, even deeper layers are created. In just the same way that Dollhouse was a commentary on television, this is a commentary on film. It’s a lot like Inception, really, but instead of dream architects being sci-fi moviemakers, members of the facility are horror moviemakers.

The point of all this is that The Cabin in the Woods is a brilliant film. Anyone who loves movies must see it, especially if you’re a horror buff. In fact, I’m gonna go see it again right now.

How great was the title card at the beginning? The most mundane scene ever and then in bloody red letters “The Cabin in the Woods!” with accompanying horror screech and everything. I couldn’t stop laughing.

And any Topher fans will love watching the greatest Dollhouse character get to play a major movie role.

Plus, who wouldn’t be stoked about seeing one of the Yellow Rangers naked.