How Wonder Woman Should Have Ended 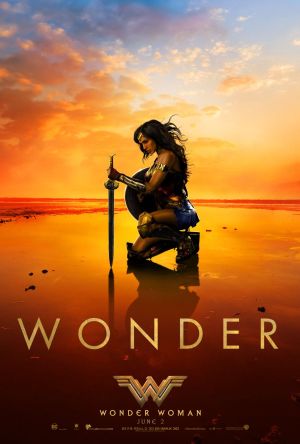 Wonder Woman is a profoundly important film. The first female-driven superhero flick of the modern era is a soaring success, galloping on horseback to glorious box office numbers and critical acclaim.

But it had the wrong ending.

Before we dive deeper, let me just say that the film works on almost every level, often in poignant and meaningful ways. There are very conscious subversions of superhero tropes, and more importantly, there are scenes that are in no way subversions, which are refreshing thanks to being told from the female point of view.

For example, when Diana stumbles upon Steve Trevor in the baths, I was on the edge of my seat with joy. The number of times a male lead has lucked into seeing the female love interest naked while bathing is too many to count (never threaten that or someone on the internet will go and count them), and it was refreshing for a woman to get to enjoy a beautiful man—I think we can all agree that Chris Pine is indeed beautiful, or at least…above average.

Beyond that, Pine gets to play a fully rounded love interest, which is a great step in the right direction. He’s a three-dimensional character with his own story arc and narrative importance. Even more important, he’s not intimidated by Diana in some backwards form of machismo—in fact, none of the men are lessened because of her strength—just the opposite; he falls in love with her precisely because she is capable, forward-thinking, and entirely her own person (who knows how to dance and fight and experience pleasure sans men). But that’s just one of the cylinders Wonder Woman is firing on.

The setpieces are incredible, with memorable and emotional action. Each setpiece means something. The amazing battle on the beaches represents the moment when things can never go back to the way they were—it’s a heartwrenching moment of loss for the protagonist. Storming the trenches shows that Diana is able to lead by example and stir the hearts of men. Freeing the town allows Diana to experience humanity’s love. The beats are perfectly plotted.

That is, until act three.

And therein lies the rub. The premise of the film is that Diana is a godkiller created by Zeus to destroy Ares, and that Ares is the cause of all war, so if she can simply defeat him, war will end.

And then there is this beautiful, deep, profound, enlightening, powerful moment at the end of act two when she “kills Ares.” What a f*cking moment! She defeats Ludendorff, and…

Because of course it doesn’t! War doesn’t exist because of Ares. War is caused by men because war lies in the hearts of all of us. We have the potential to do overwhelming good or enact overwhelming evil.

Diana kills Ares, but that doesn’t mean World War II doesn’t happen. It doesn’t mean we don’t go to Vietnam, or that there aren’t genocides or mass murder or terror attacks.

The moment when Diana is at her lowest, when she realizes that killing “Ares” won’t stop the war, is perhaps the most excited I’ve ever been in a superhero film. Steve Trevor tells her that maybe it’s not Ares. Maybe it’s us—but that doesn’t make a difference; things are still worth fighting for. And then he leaves to go try to do as much as he can to save lives.

At that moment, I was beside myself with how gutsy this film was, how powerful the theme. This was a superhero film that was going to exist WITHOUT A SUPERVILLAIN.

How incredible would it have been if Ares never existed, if Zeus truly had killed him all those years ago? And here Diana is seemingly without purpose, and then she must come to the realization that it’s not Ares who caused this, that men have the inherent potential to do evil, but they’re worth saving anyway? If the entire climax were about stopping that plane because even without a villain, saving lives and ending war are still worthy goals?

If the film needed a big bad for a boss fight, it should have been Dr. Poison. There could’ve been an explosion that blew up dozens of the small canisters Ludendorff was inhaling, and Dr. Poison could’ve gotten roided out on an overdose, and Diana could’ve had to fight her while Steve worked to down the plane. They could’ve worked together to complete the mission.

Because that’s all any of us can do. Our part. Our best to make a difference and lead by example.

How amazing would it be to see a superhero film discard the concept of a supervillain because villainy isn’t about supervillainy. Villainy is about being human, and at the end of the day, what matters is doing good in the moment.

This is the statement the film was making throughout. The underlying theme that elevated this piece of cinema. When Diana crosses No Man’s Land, it’s because she’s doing good in the moment because it’s the right thing to do. And the ending tried to have it both ways.

They tried to have a villain who was saying simultaneously “I am the supervillain” and also “none of this was my doing. It was their doing.” So if it’s their doing, why does Ares need to exist at all? You can’t have it both ways, Wonder Woman! Either he matters or he doesn’t matter. And my god, what a powerful film it would be if he truly didn’t matter.

I believe in my heart of hearts that somewhere out there exists a script without Ares, and it’s the blueprint for what could have been the greatest superhero movie of all time. But somewhere along the line, some exec comes in and says, you have to have a supervillain—Ares is the whole backstory! And so they shoehorn him in, but to attempt to maintain the theme, they force him to have endless doublespeak where he says he’s insignificant and irrelevant (and yet you still need to kill me for some reason and when you do all the soldiers will hug–but yeah, still they weren’t under my control or anything).

[Plus, their whole battle breaks Sanderson’s First Law–because we don’t know how fighting between gods works, we’re not invested. Every other fight sequence is amazing because we’ve been introduced to her shield, her lasso, her sword. God powers come from nowhere, and they can teleport and materialize weapons out of thin air and none of it is grounded in magic we understand, so we have no conception of when they’re in danger or how either one of them can win.]

This film is profoundly feminist. It is beautiful. It is moving. It is f*cking badass. And it was nearly the most interesting superhero film of all time. In an era when supervillains wreak endless destruction, decimating entire cities without a second thought, we nearly had a film that changed what it meant to be a hero.

So yeah, that’s how Wonder Woman should have ended.