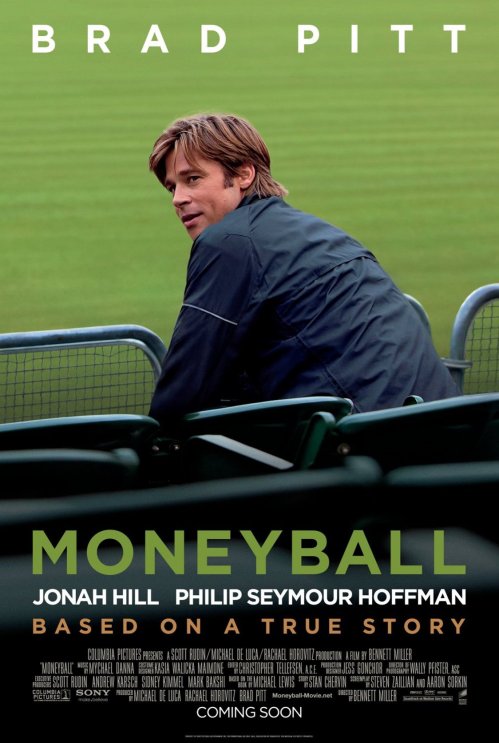 I would certainly love to happen upon a ball of money.

I love baseball. Played 14 seasons growing up. Even helped win some championships. Batting was always my favorite. There’s nothing more intense than standing there, staring down that pitcher, bat twisting between your palms, waiting for the ball to come whipping out of that hand at insane speeds. Watching the pitch come flying toward the plate is the only way I’ve ever experienced bullet time, and the satisfaction of tracking a curveball in perceived slow motion until it smacks into the sweet spot of your bat can’t be matched. Fielding was good too. I mostly played pitcher, first, second, shortstop, third, left, right, and center. Plus, when my dad was the manager, every night he’d look over all of the team’s stats with me and spend hours agonizing over how to arrange the team to create the perfect fun/success ratio.

What I’m saying is, I know a thing or two about baseball, so when I go to a movie on the subject, I expect a lot, and if they don’t get it right, I’ll tear into it with a passion.

They got it right.

But then again, it almost wasn’t a baseball movie. Brad Pitt plays Oakland A’s general manager Billy Beane at a time when the team’s just lost its three star players. Faced with the difficulty of getting new hotshots on a bare bones budget, Beane turns to economy major Peter Brand (Jonah Hill). Brand convinces Beane that stars don’t win games. Runs win games, and runs aren’t scored with big hits and amazing plays in the field. They’re scored by getting on base.

Don't worry. Jonah Hill's still chubby for this one.

Beane takes this advice to heart and throws out all the conventional wisdom of baseball sages, willing to hire players who don’t know anything about fielding as long as they can take pitches and end up with a walk. Most of the film is about people who think they know baseball not believing in this new system and Beane trying to stick with it in the face of early failure. Like I said, it’s not a baseball movie.

But The Social Network was a movie about computer programming, and if they can make that exciting, I guess they can do it with anything. Brad Pitt helps with a great performance as the conflicted manager, and Jonah Hill is surprisingly good. The success of the film rests squarely on their shoulders, and while shots of endless statistics scrolling across a computer screen are a little cheesy, they’re not that bad. As the film builds up the hopelessness of being such a monetarily poor team, you can’t help but root for them. Right from the beginning, you’ll be emotionally hooked, and it won’t let up until the very end. 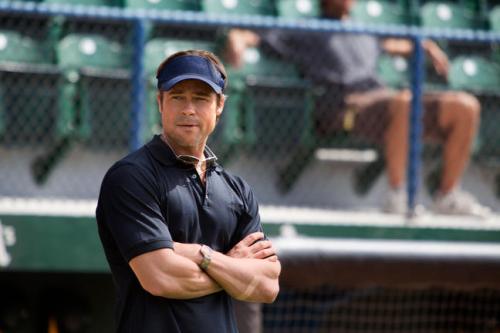 One of the cool differences about this underdog story is that the characters aren’t stars. The power wasn’t inside them all along. Instead, you’re rooting for the players to get walks, to get hit by pitches, to hit scrappy singles, to allow runs to score on a bunt and take the easy out. The movie gets around this by making the climax not about a championship, but about the potential for a record-breaking winning streak, and man is it exciting.

Another key difference is that, for something advertised as a pure sports drama, it’s surprisingly funny. I think I laughed harder at this than at The Hangover 2. In fact, I think it’s the funniest movie I’ve been to this year.

This movie makes you believe. It’s makes you believe on the same level as Remember the Titans or any of the great sports movies, except you believe not in the players, but in the power of statistics, and for some reason you care. When the other characters in the film refuse to believe, when they work at every opportunity to undermine and diminish our hero, Statistics, you want to punch them in their grubby little faces. I love when a film can really make me despise somebody, and Moneyball pulls it off.

If you love baseball or Brad Pitt or sports movies or economics or feeling emotions or laughing or good cinema in general, go see this movie. It’s worth your time.

I’d be remiss if I didn’t mention that Moneyball contains one of the greatest scenes in any sports film ever. When Beane and Brand are trying to trade for Ricardo Rincon, it’s nearly show me the money status. I won’t say much more since I don’t want to spoil it, but you’ll love it. I promise.

2 responses to “Moneyball—The Art of Winning via Beane Counting”