Sucker Punch: What The Hell Happened?

Some of you probably just think Sucker Punch is one of those smorgasbords for your eyes, but I’m here to tell you that there’s more. What more you ask? Well, besides being a complete overload of sensory input, this movie is also confusing beyond all reckoning. At least, it probably was to everyone who isn’t nearly as insightful as I. So if you’re wondering what happened, pull up a chair, sit forward, and let me tell you.

Theory 1: The main character of this film is actually Sweet Pea. Baby Doll helps her escape, and Sweet Pea is able to start a new life.

Theory 2: Baby Doll and Sweet Pea are aspects of the same person. 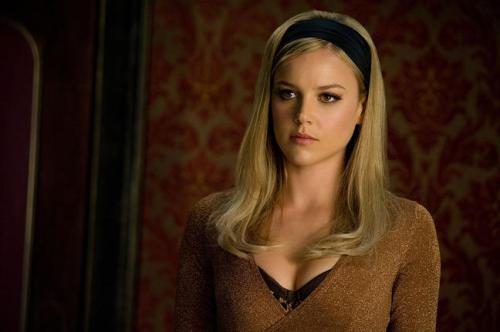 The movie opens with a narration by Sweet Pea, leading us to believe it’s her story. She tells us that angels may come in any form, including little girls (i.e. Baby Doll), but that they’re not here to fight our battles. They’re here to help remind us that we control the worlds we create. Baby Doll is Sweet Pea’s angel, and when she arrives at the asylum, her impending lobotomy reminds Sweet Pea how sacred a place the mind is, and she uses this newly rediscovered knowledge to create an imaginary world she can retreat to during her escape attempts so that fear doesn’t overtake her.

The entire burlesque layer is Sweet Pea’s creation, which makes sense, since Sweet Pea is the main dancer. We’re all the main characters of our own imagination. The question then becomes why we get a battle that contains only Baby Doll when she’s fighting those robot samurai. It’s a valid concern, but perhaps Sweet Pea is simply entranced by Baby Doll’s dancing and chooses to imagine it as a battle. If that’s true, why is it Baby Doll who meets the old man and comes up with the plan? Maybe Baby Doll really did come up with the plan, and to give it some more credence, Sweet Pea inserts a wise man into her imagined version of Baby Doll’s story. 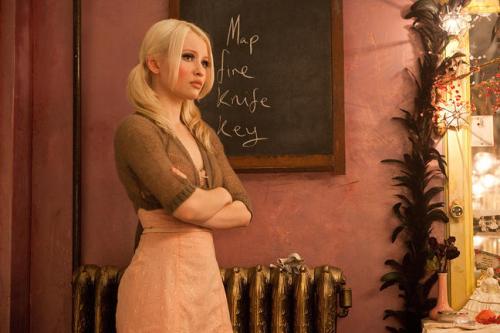 What’s happening in the asylum this entire time? Baby Doll is brought in, rebels, and comes up with a plan. Her dancing might represent fits of mental breakdown, minor attempts at escape (like fighting guards or running through doors) or even actual dancing. But no matter what it represents, it’s powerful enough that Sweet Pea must fit it into her imaginative storyline.

Sweet Pea escapes. When we’re finally in reality at the end of the film, the female doctor tells us that Baby Doll caused quite a bit of trouble, including helping a patient escape. We should believe any information that’s actually presented in reality, for there’s very little of it. If a patient escaped, it only stands to reason that it was Sweet Pea, for she’s the only one who comes close to escaping in any of the imagined layers.

But if she really was set free, then why does the last scene look so imaginary. Whenever we transfer to another layer of reality, the camera starts on Baby Doll then does a 180º spin. In the last scene, Baby dolls closer her eyes, the camera spins, then we see Sweet Pea meet a bus driver who is none other than the wise man. If this is supposedly real, then how did any of the characters know the bus driver well enough to insert his face into their imagination? She couldn’t possibly have met him before, could she? And why did the bus driver lie, saying that she’d been on board the whole time so that the cops didn’t question her? It all seems a little convenient. Isn’t it more likely that Baby Doll is simply imagining this as well?

The last scene of reality at the beginning of the movie is Baby Doll lying down in the doctor’s chair, about to receive a lobotomy. If we’re seeing this scene, it only stands to reason that Baby Doll has already failed to escape and we’ve reached the end of the film. In the next scene, Baby Doll wakes up in the burlesque layer, only it’s not Baby Doll. It’s Sweet Pea in the exact same position wearing a blonde wig.

Baby Doll receives the lobotomy, and her last shot at survival is to retreat into her mind where she creates Sweet Pea, the sexy, confident dancer. The rest of the film only covers a few seconds in real life, the small amount of time it takes to perform a lobotomy. In that time, Baby Doll fantasizes an entirely different situation and an escape, and as she loses her mind, the burlesque layer becomes even crazier, slipping into the crazy battle scenes we saw earlier. In this reading, we no longer have to try to match the fantasy imagery to the layer of reality, for nothing is actually happening in reality.

By sacrificing herself to help Sweet Pea escape, Baby Doll is able to find solace, realizing that though she, the physical version of herself, may not make it, Sweet Pea, Baby Doll’s imaginary self, is free, unable to be harmed by the cruelty of the world. Sweet Pea is Baby Doll’s angel, whispering the reminder that we have power over the world we imagine, and in that world lies freedom. If this is true, then who actually escaped? The doctor says someone did, so it must have happened. In this reading, we’re required to assume that we don’t know who actually escaped, just that it happened.

Also, if the whole film is simply a few seconds of a mind’s last thoughts before being erased, then how do we explain the other information the doctor gave us and its relevance to the movie. She tells us that Baby Doll started a fire and stabbed someone, actions that directly link to the fantasy world. Is it possible she accomplished all that in the 5 days before the lobotomy, including helping someone escape, and that we didn’t see any of it? That the movie flashes forward to the lobotomy, and we get to see Baby Doll’s twisted, imaginary version of the previous 5 days? That’s what I think.

What do you think? Who teaches us what’s real and how to laugh at lies?

92 responses to “Sucker Punch: What The Hell Happened?”