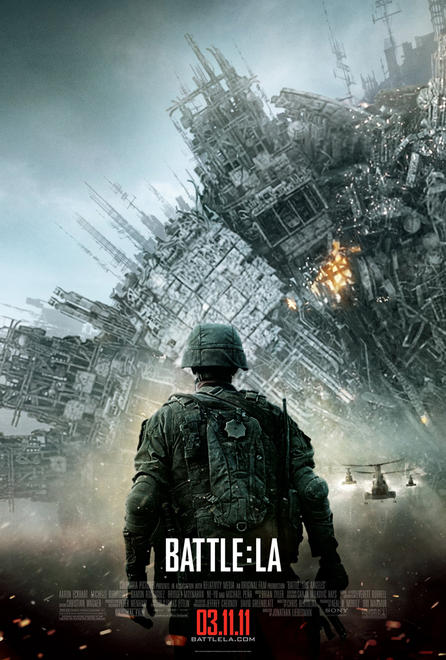 And then they die, just like that. At first you think a reasonable number of the characters will survive, but like I said, this movie is all about the intensity, and it keeps you on the edge of your seat no matter what. Suddenly aliens are storming into the building, swarming the characters with superior tactics and tech. Gotta get the kids out, but they’re everywhere! How do they even kill these things? Nantz cuts one open to find its weak spot but it’s like their tech has been grafted to their muscles. How the hell do you kill them?!

If there’s one thing that keeps me up at night, it’s fear of an alien invasion. That, and copious amounts of caffeine, the lure of videogames, and pretty much anything else, but mostly it’s the fear. That’s why I was so excited to have a marine move into my apartment with me. I figure marines are pretty badass, so with him around I could sleep easier. My excitement quickly dwindled, however, when I realized how much exercise he was going to make me do. Running every day! Plus all sorts of pushups and marine-type body-destroying things that make me hurt everywhere.

It’s all worth it though, for the protection. Only problem is, he’s the kind of marine who paints picturesque ocean views and studies vocabulary of his own volition and likes to debate philosophy, all while steadily improving his culinary skills. If we needed someone well-versed in philosophy to use grandiloquent rhetoric to persuade our malicious invaders of the immorality of their actions, I wouldn’t need marines. I could just do it myself. If we need to shoot them in the brains, I’m willing to step aside and let someone with training go ahead and do that. Thankfully, the marines in the movie were much more battle-focused than the one in my apartment.

One of the coolest parts of Battle: LA is its opening. It starts in medias res, which kicks off the action with extreme intensity. A newscast plays over the opening credits, then there’s a cut to shots of LA being blown the hell up. A military leader explains that we’ve lost San Francisco and San Diego, and Los Angeles is America’s last line of defense in the west. It cannot be overrun! Then suddenly the main characters are in a chopper, heading for the front lines, under heavy fire, with people dying everywhere. I knew Battle: LA was going to be all about war, but I didn’t think they’d go so far as to skip characterization completely. To be honest, I was excited. I’d never seen a movie do something like this before, and if they could keep up that palpitating level of pure intensity, I’d be hooked.

Sadly, it quickly flashes back to 24 hours before the attack and goes through all the standard character intros. They’re made even more standard thanks to how little time is spent on them. SSgt. Michael Nantz (Aaron Eckhart) is the only one who becomes any sort of relatable. Every other character gets about 1 paltry minute of humanizing screen time, but there are so many marines in the troop that your eyes just glaze over while you wait for more action. After five minutes, I couldn’t have matched a single character to his backstory if my life depended on it. But who cares? It’s a war movie!

And war it does well. Around every corner lurks danger, each consecutive moment ushers in new fear, and after the first few deaths, I realized no character was safe. It’s the intensity that makes this movie worth watching. People die bravely, and people die for no reason other than bad luck; some die after heart-wrenching monologues, and some die without warning. People receive injuries, show great heroism, yield to their cowardice, and generally run the gamut of war-time emotion. The moments when two characters look at each other knowing that one is about to sacrifice himself are truly compelling, and there are more than a few poignant speeches. They may not have good backstories, but sheer adrenaline makes you care for these guys.

The set pieces and general look of the film elevate these scenes to an even higher level. The camerawork is anything but smooth, so you feel as if you’re running right alongside the marines. And Los Angeles looks like a battlefield. Fights break out in suburbs, on broken-down freeways, and, at one point, in a dimly-lit police station. The sense of fear really starts to mount as Nantz investigates alien anatomy, searching for a weakness while a select few marines are ordered to hold off the inhuman enemy. You think they’re gonna do it…

And then they die, just like that. Suddenly aliens are storming into the building, swarming the characters with superior tactics and tech. How the hell do you kill them?! The aliens are hard to kill, but the fact that they’re aliens hardly matters. Science fiction really takes a back seat to what is essentially a movie about a small troop of men facing overwhelming odds. In fact, the aliens get basically no story time at all. This is no Independence Day, what with that alien that takes over the scientist and speaks through him. Battle: Los Angeles is much more realistic and not nearly as light-hearted.

Not everything works, however. There’s a subplot about all the men distrusting Nantz that feels totally superfluous. Anyone with half a brain can tell that Nantz is probably the best guy in the world, so when they finally all come to terms through a heartfelt speech, it doesn’t jive.

The movie knows what it is: an explosive war story. It focuses on a small group, builds intensity until you can’t take it anymore, and delivers on sweet action.

Michelle Rodriguez was sexy and badass, killing aliens all over the place and looking hot while doing it. She’s pretty much always the same character, isn’t she?

Epic F-Bomb usage, and in a PG-13 movie, you’ve got to make it count. During the final battle, Nantz says, “Marines, we make our stand right here. Let those bastards know who they’re fucking with.”