Easy A – A Better Late Than Never Review

So I saw Easy A last week, a few months after its theater run. It’s not a movie I’d normally see of my own volition, but it was a free showing, Emma Stone is hot, and since Easy A got decent reviews I figured it was safe to temporarily expose myself. And I’d like to make clear in advance that I knew what I was getting myself into. And it’s not really fair of me to begrudge the film its genre conventions. But they opened themselves up to it by openly acknowledging them, so I’m going to call this one fair game. 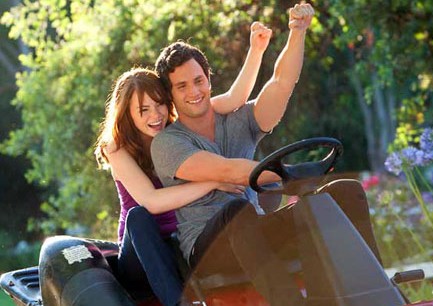 Emma Stone stars as an intelligent, unassuming hot girl, a cipher for all the bookish white teens watching. After lying about losing her virginity to best friend Michalka, Stone attracts the attention of their school’s stunningly efficient rumor mill (played with rigidly rehearsed efficiency by Steadicam operator Geoffrey Haley). Evidently this is a huge deal, and Stone is immediately labeled a harlot and shameless hussy by the school’s ardent, very vocal religious community.

Through a series of convenient coincidences incorporated to ease digestion of the plot, Stone chooses to embrace and perpetuate this rumor, first to protect her totally gay friend, and then because she pities a fat, sniveling stereotype. She proceeds to take payment for lying about her sexual escapades in the form of gift cards. This is doubly efficient because

2) It’s not real money, so you don’t have to explicitly address the fact that your protagonist has essentially become a prostitute.

One montage of wry commercial transactions later, and Emma Stone’s bad-girl behavior has gone too far. She doesn’t know who she is anymore, everything’s so messed up. Except it isn’t, because the nice-guy childhood crush trusts her version of events and actually really likes her. Together they stage an elaborate dance number in the gym on the day of the big basketball game to announce her live webcast explaining everything and clearing her name.

So basically, Easy A is exactly like every high school rom-com ever except for the fact that it was made in 2010 and therefore must exhibit an awareness of the culmination of pop culture that’s preceded it. I lost track of how many times the film winkingly referred to the fact that the plot was “just like one of those cheesy 80’s movies”, as if acknowledgement of that fact exonerated it of any derivativeness. Usually this meta-commentary was through Emma Stone’s webcast voice over. If this reach at “topical” youth culture wasn’t insulting enough, the narration is consistently used to repair lazy screenwriting, caulking in all the signposts and plot advancements the acting neglected to include.

Now, “meta” is something of a joke nowadays cuz it’s rampant, but it can be used effectively. In Easy A, it is not. Stone’s observations point out the creakings  of the plot machine and justify a couple homage moments, but the only element of meta wedded to the plot is the fact that it’s framed as a webcast. The movie doesn’t take it any further than that.

Think about this for a moment. There’s actually a lot going on here. It’s a mesh of the Scarlet Letter and 80s comedies set in the nascent technological wonderland of the 21st century. You could go to town on themes of vouyerism and spectacle; you’d even be able to implicate the viewers of the film for going to see a story about a hot promiscuous girl. The more I think about it, the more I realize this plot had a lot of potential.

Despite what my criticism may communicate, the movie wasn’t terrible. It was thoroughly average and even funny at times. When I think about how awesome it could have been, the mediocrity stings me more than an awful movie would. Easy displays the bare minimum of effort, the movie equivalent of fast food. It stands in the shadow of older, better works of art, offering no commentary or innovation. The pretense of meta-comedy becomes a shield the writers use to defend lazy and strategic screenwriting. What we see here is a cookie-cutter script developed for an up-and-coming marketable actress. It’s a remake of Mean Girls, with a Lindsay Lohan who hopefully wont self-destruct. 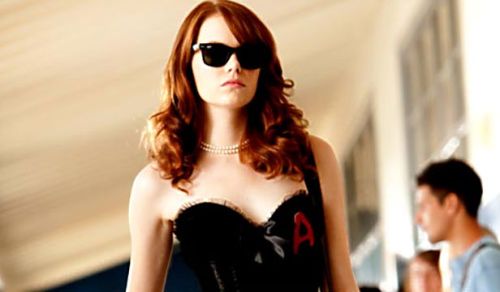 Every character is a stereotype chosen with formulaic calculation. Amanda Bynes plays an idiotic evangelical included to provide the opposing viewpoint with a villifiable antagonist. Dan Byrd is the non-threatening gay friend who shows up when the plot requires him. Penn  Badgley (listed as “Woodchuck Todd”) plays a love interest whose defining character trait is that he wears funny things. Thomas Hayden Church stole his deadpan teacher shtick straight from Tim Meadows. I wouldn’t be at all surprised if they wrote in Stone’s adopted brother when they started shooting, took a look at the cast and said, “oh shit, we need a black person!”

There was some stuff for me to love. Stone’s protagonist is a bookworm, and so her jokes often appealed to the English major in me.  Her parents are pretty funny. But the few gems that existed were quips, shoehorned into static scenes chosen for convenience of shooting rather than any inherent interest. While their words may have been objectively funny, they were in a story without energy or momentum.

This overall laziness is evidenced by the sloppiness of the film’s exposition. The writers didn’t go to any trouble to embed the plot in the film, leading to moments like the Turning Point, where Stone’s scandalous behavior goes too far. What happens is the school counselor, who happens to be the wife of Stone’s English teacher, gives gonorrhea to a student who happens to be “going steady” with Amanda Bynes. The student implicates Stone because she’s an easy target, who agrees to corroborate the alibi because she cares deeply about preventing her favorite teacher from discovering that his marriage is a sham and he should probably get tested for gonorrhea. I could delve further into why this is absurd, but the main point is that none of this is set up or explained before it’s all dumped on us at once. We only learned that the school counselor existed about five minutes ago. We didn’t even know that she and another major character were married until one of them got gonhorrea.

This isn’t an isolated incident. It happens regularly, with Stone’s wry narration “reminding” us of three more things that weren’t mentioned before but are now vitally important to the advancement of the plot.

And part of me thinks maybe I missed something, and in actuality the whole movie went over my head. All these crazy coincidences and random plot elements, all the stereotypical cardboard cutouts, they’re all part of some grand deconstructionist joke that I was too judgmental to miss. Maybe all the random stuff that happens is just a reflection of the chaos of real life. Or maybe they just had a tight deadline.