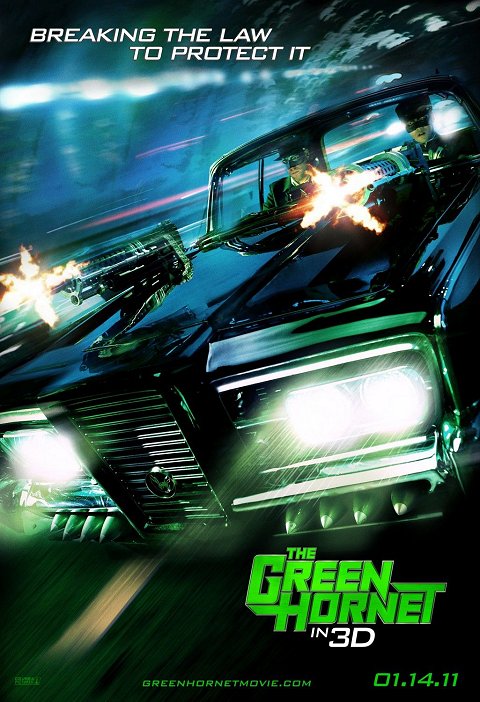 In an effort to battle the exorbitant cost of 3D movies (especially the ones that undergo 3D conversion post-production), I went to the Sunday matinee showing of The Green Hornet. I don’t know if that’s really the optimal environment for a superhero movie, but I do know that I felt super awesome seeing a movie by myself in a theater lightly sprinkled with moms. What made me even more awesome was my flirtation with the cute ticket taker and cashier, only to have them realize that I was friendless at the movies and therefore genetically undesirable for the production of offspring. But hey, free parking downtown on Sundays! Which makes me wonder…how many of those moms were actually angry San Luis Obispo meter maids?

As my stylish RealD glasses weighed down on my nose (which, by the end of the movie, was acting rather affronted), the previews drew to a close, and what followed was a moderately entertaining film. By no means a perfect creation, The Green Hornet lived up to its Buzz with charm enough to overcome the fact that it was little more than a souped-up, buddy-cop movie. While its generic overarching plot had a bit of originality Nested here and there, what really kept things aloft was Seth Rogen’s light-hearted tone and performance. Britt Reid (Seth Rogen) and Kato (Jay Chou) were fun characters to watch and had pretty good chemistry. I believed their friendship, their obligatory fallout, and their eventual reconciliation, and I laughed out loud at lines like “Do some of that Ben Hur shit!” Sadly, I was the only one who laughed during the entire movie. Man, those parking enforcement officers really don’t have souls.

As always, Cameron Diaz was totally useless. She is the Queen of inane, managing to evoke a sense of lifelessness in every role. She Bumbles through her character, Droning on and basically adding nothing. At least it was a new take on the love interest. She wasn’t really interested, and neither was she interesting. In fact, I feel like she was almost more objectified this way. Rather than either of the main characters forming a connection with her, she simply served as a vehicle for Britt and Kato’s argument. I guess that’s what they get for trying to stick their Proboscises where they don’t belong.

Speaking of vehicles, the Black Beauty was one of the most badass cars ever. The sheer number of weapons and gadgets made it the coolest thing since MIB’s red button. What wasn’t particularly badass was the bad guy. In an attempt at humor, the villain constantly worried about his image and his hard-to-pronounce name, and he was right to. He just wasn’t intimidating. I never felt the Sting of real fear or the sweet Nectar of joy at any point during the film.

One of the more interesting stylistic choices comes partway through the movie when the villain puts a bounty on the Green Hornet’s head. The shot then enters an ever-expanding split screen as word of the reward spreads through all the different circles of evil, from the Thorax of malcontent to the Mandibles of hate. Watching the sheer number of thugs on the screen grow as they receive their mission really does add a sense of dread to an otherwise threat-free story. More and more split-screens kept showing up until I was so overwhelmed that I couldn’t keep track of them anymore. I waited for the repercussions of this onslaught, only to watch as the group of villains murdered a ton of innocent people wearing green and then never reappeared. And just like that, the sense of dread was gone.

The Green Hornet was basically fun. It doesn’t take itself too seriously, and there’s some entertaining action and comedy. In no way does it surpass expectations, however, and many other films are better able to embrace the genre. If you’ve got some extra cash and a bunch of guys are sitting around bored, it might be worth checking this out, but otherwise you should probably just wait until it’s on Netflix.